This page is a collection of miscellaneous travel advisories related to Ireland.  More general tips can be found on the travel advisory page of our sister site, TravelShepherd.com

Should You Pay in Local Or Home Currency When Traveling?

While in an ideal world there’s shouldn’t be a difference between the two prices, turns out there definitely is, and it’s a way to get more money from you, and make your trip just that little bit more expensive.

The short version is, pay in the local currency. If you don't, not only will you get charged a mediocre rate to convert to your home currency, you’re charged a percentage for the privilege. While 3-3.5% may not seem like a lot, it adds up. There are a few exceptions, which we’ll discuss. 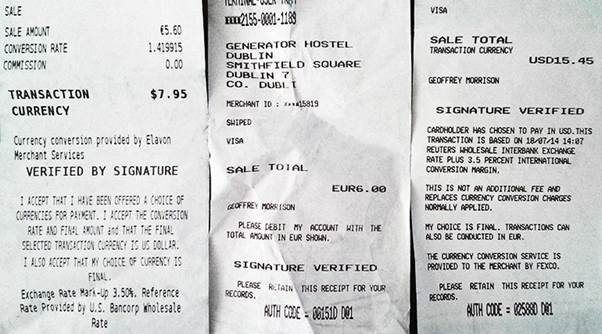 The center and right receipt are from the same location on the same day. Interestingly, the one on the right also incorrect states this isn't an additional fee, which if your card doesn't charge you international transaction fees, it is. I have other receipts that show all the same words, but don't specify the fee.

As you can see from the image above, you’re charged a fee for paying in your home currency. So right off the bat, you’re paying more for whatever you’re buying. Your benefit for this “service” is being able to see what the cost was in your easily understandable home currency. I’m not sure how this is worth 3% or more, since you’ve already bought the item/service and this is just paying the bill.

In addition to the conversion fee, you’re likely going to get the worst exchange rate possible. Will your bank/credit card provider give you a better rate? Maybe. It’s hard to track these things, especially while you’re on the go. It all comes down to a thing called DCC.

This is possible thanks to a “service” called Dynamic Currency Conversion. This is provided by an unaffiliated company that acts as a go-between from the merchant, and your credit card provider. They charge around 3% of the purchase price to convert to your home currency.

I’ve been travelling for 5 out of the last 7 months, using my card for nearly everything, and not once, when offered the choice between local and home currency, was I told about this extra fee. When I asked about it, no one knew what the difference was, nor which I should pick.

I wouldn’t go so far to call DCC a scam, but it certainly is preying on traveller’s ignorance of this service. It's also worth pointing out, merchants make additional income when you use DCC.

On top of that (or maybe instead)

If your card charges international transaction fees, DCC could be on top of that fee, or instead of that fee. I only have one card that charges for international purchases (which is why I never use it). It’s a Citibank Mastercard, and when I called them to check on this, I was informed that if I pay in dollars, they won’t charge the fee.

As in, I can pay 3% for DCC, or a 3% transaction fee to Citibank, but not both. Some banks, however, might charge you both, so now you’re paying 6% or more for everything you buy.

Some banks might have a lower fee, which is yet another reason to pay in local currency. Better yet, get a card that doesn't charge international transaction fees. Many don’t, especially the mileage cards. If you travelinternationally a lot, I highly recommend getting one that doesn’t. Should save you a lot of money.

So lets recap: Paying in your home currency will result in a, roughly, 3% conversion fee. If you have a card that charges international fees, that could be on top of the conversion fee, or instead of it.

And of course, it’s worth checking with your credit card or bank to be sure.

A digital nomad in search of life, the universe, and everything. You can check out my world wanderings as a digital nomad at BaldNomad.com.

Another ongoing change in the travel industry is increasing availability of affordable rentals of holiday homes, vacation cabins, or as we call them in the Greek islands, private villa rentals.  For families these homes are usually less expensive, more spacious and better equipped than hotels and resorts. For couples they can provide much more comfortable privacy in your own hideaway.  See our own site on private villa rentals in Paros, Greece: Greek Island Villas 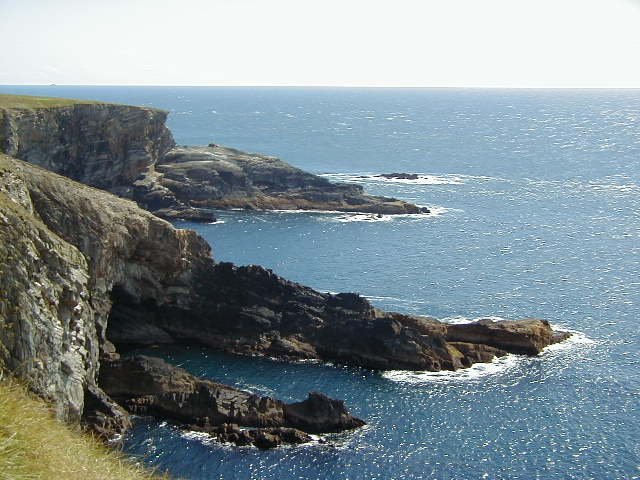