Although we have had many experiences in Dublin, mostly good, it is a difficult city for us to write about. Any general statements about Ireland do not apply to Dublin and vice versa.

Since our first trips in the early 90's it has changed greatly and we have changed even more so.  Thus our thoughts and impressions are constantly evolving.

Karin has done extensive research on the history of Dublin, specifically the background of sites that can still be seen.  We have compiled this into a series of brief notes about the highlights of walking around central Dublin. Our Dublin Historical Highlights  Lots of photos there as well.

When we moved back to Ireland in 2012 circumstances conspired against us to spend time becoming reacquainted with Dublin.  During what little time we have spent there we were greatly impressed with the public transit system; it is now quite easy to get around and with due speed--no endless waiting at clogged intersections as in the old days of 2000.

Middle December was a little slow in Ennis so we decided to hop over to Dublin for a day of hectic Christmas spirit.  Catching the earliest train there and the latest back allowed eight hours in Dublin--too much for our old legs it turned out.  Yet we greatly enjoyed it and included visits to two free museums, the National Museum of Archeology and the Chester Beatty Library amongst all the holiday gawking. 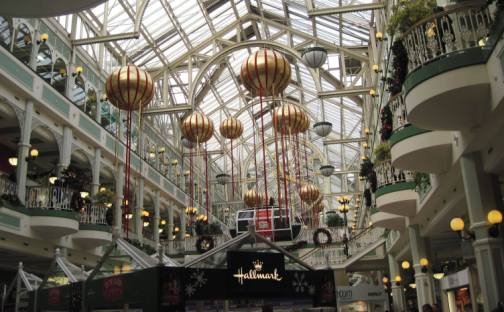 Guinness Storehouse -- a converted brewing factory is now a Guinness museum incorporating elements from the old factory to explain the history of its production and marketing. Some of the old brewing equipment is on show, as well as stout ingredients, brewing techniques, advertising methods and storage devices.

The exhibition takes place over 7 floors, in the shape of a 14 million pint glass of Guinness. The final floor is the Gravity Bar, which has an almost 360° panorama over the city, where visitors can claim a free pint of "the black stuff".  The storehouse is where they used to add the yeast to the beer for fermentation.

Guinness Storehouse visitors do not get to see the beer being brewed in front of them, but from various vantage points in the building you may see parts of the brew house, vats, grain silos and the keg yard.  In 2015 surpassed Cliffs of Moher as Ireland's most visited place. 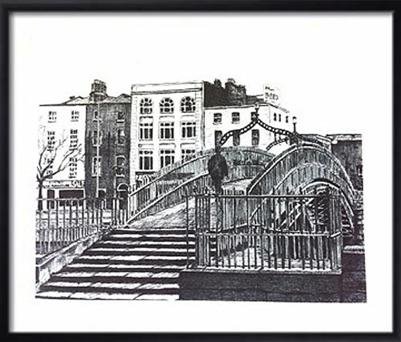 Print of Ha'Penny Bridge from The Irish Store

More Ireland info yet to come